You are here: Home / other / Android Tab VS Windows Tab: A Tough Fight

When we are talking about tablets, it is the operating system that will decide what tablet we should go with. But it’s not just operating system, but a group of features packed into one component that will do the judgement. While, Windows 8 is supposed to be the new kid on the block, ready to challenge the neighbourhood’s old bully. On the other hand, Google’s Android OS has been into market since many years, gaining popularity. Let’s see the comparison between the two and which tablet beats the other: 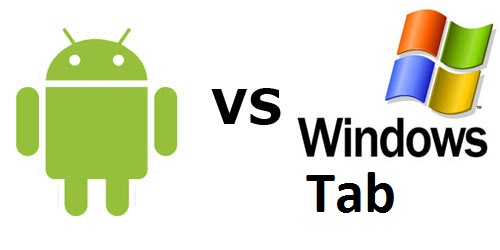 Android OS based tablets are not completely compatible with all the apps that may be used in latest devices. The developers may have to put in lots of efforts to make it generalized for different devices. Different views have to be provided for different devices otherwise there may be distortion in the main screen. On the other hand, Windows tablets will use excellent main screen resolution so that desktop applications, flash play multi-tasking may work smoothly. Windows tablets being compatible with almost all the applications act as the positive point for it.

Microsoft will provide regular updates of Windows OS that can be directly downloaded or updated from Microsoft’s official website. These updates include Microsoft .NET framework 4 update, Security updates, Microsoft Office Updates, Internet Explorer update. Whereas Android tablets can be upgraded only to that version, which the hardware supports.

Because Windows OS consists of many files, it is going to eat up large hard disk space, while in case of Android tabs the memory consumption is less as they employ threading mechanism that are light weight process.

Android being into market for so many years has developed itself a huge app store with 450,000 apps and counting. Many of them being paid apps, users hesitate to spend a few bucks on them. In this regard, both Android and iOS have smartly made apps, thus giving a richer experience as an OS.

Over to Windows, this is the field where Microsoft will have to do a tough job. Being a new OS, it may take some time for developers to develop their interest.

Price is going to be one of the main factor when comparing these two devices. In this regard, Android has shown its proficiency by the success of tablets such as the $199 Kindle Fire.

As far as Windows 8 is concerned we are not so sure of the price, because the OS has still not made its commercial debut. But a $200 Windows tablet can certainly be made available by the end of 2012 as the rumors say.

Android being into market for so long has definitely got an edge over Windows tablet. On the other hand, Microsoft will have to try harder by including more new and attractive features that will catch customer’s eyes, thus making its mark in the market.

Android tablets are still having problems with Honeycomb OS while Windows 8 will also have a tough time to be called as a tablet system.

At last The Question: Which tablet is better to use?

Well, the answer depends on what you are looking for ??? The Windows based tablet has got more points when we talk about Time-to-Time Updates, Speed-Performance ratio and Graphical User Interface, while Android based tablets have an upper hand in Cost factor, Google’s AppStore and Memory requirement. So, if you are short on budget you should go with Android Tab and If you have got few extra bucks in your wallets you should preferably opt for Windows Tablet.