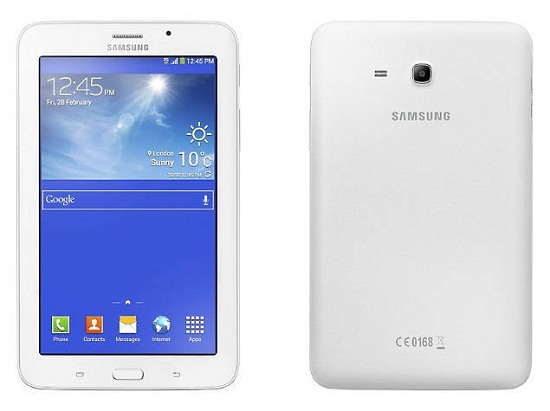 Samsung Galaxy Tab 3V has been officially landed the e-store of Samsung India and has been priced Rs. 10,600. Earlier, Samsung has launched two voice calling tablet Galaxy Tab A & Galaxy Tab E. Being a international brand Samsung Tab 3V will give a tough competition to other tabs in budget section.

Tab 3V has got Sim slot with 3G support which can be used to access Internet but this tablet can’t be used for Voice calling.

Specification:-
Tablet comes out-of-the-box with Android Kitkat v4.4 and has got company TouchWiz interface on top. It display 7-inch WSVGA LCD screen with 16:9 aspect ratio with pixel resolution of 1024 * 600.

It has been powered by 1.3 GHz quad-core processor with 1 GB of RAM. ROM is of 8 GB which can be expanded by microSD card upto 32 GB.

While, if you are wishing for latest Samsung Voice calling Tablet then you should meet Galaxy Tab A and Galaxy Tab E. Both the tablet supports voice calling and has been priced Rs. 20,500 and Rs. 16,900 respectively.

Galaxy Tab A supports 4G LTE and runs Android Lollipop. It features 8-inch display, powered by 1.2 GHz quad core processor and coupled with 2 GB of RAM. It has been backed by camera at both end i.e. rear camera is of 5 MP and front facing camera is of 2 MP.

Galaxy Tab E supports 3G and runs Android Kitkat v4.4 OS. It has got large display when compared to Galaxy Tab A i.e. 9.6-inch WXGA TFT display and has been powered by 1.3 GHz quad core processor.