Earlier it used to be only big brand names like Apple, Reliance and Samsung that dominated the Tablet market all across the globe. But over time many new companies have felt the importance of Tablet’s emerging market in India, all because of their attributes i.e. Light Weightiness, Portability, Integrated Camera, SIM module, Wide Application support, Good Battery Life, Bluetooth, Wi-Fi, GPS support. They surely are a better substitute to the Laptops.

In last couple of months we have seen a flood of low-cost tablet launches in India. Many new vendors have already jumped into tablet market that includes names like HCL, Zync and iberry. Now its Micromax’s turn to introduce it’s much awaited Rs 6,499 Funbook tablet. The excitement and interest in online world could be clearly seen when two of the Top 10 tweets on Twitter were related to the tablet. The tablet is aimed towards Smart YoungGen says Micromax CEO. 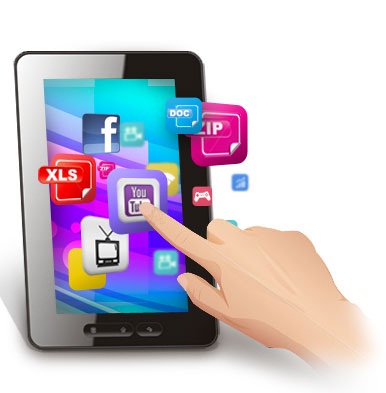 Lets see what Micromax Funbook has in store for us:

Along with its good and attractive looks, the 7-inch 800×480 pixel touch screen goes very well with hardware specifications too. Weighing under just 350gm Funbook is very light weighted and easily portable. It can be easily held in one hand for hours unlike iPad 2.

Funbook comes with many ports including Headphone Jack (3.5 mm), micro SD card slot, HDMI slot, mini USB slot and at last power socket. Micromax has provided three unnecessary hardware buttons on the right side that are a bit irritating as they are not needed in Android 4.0 Icecream Sandwitch.

The 1.22 GHz Cortex A8 processor and 512MB RAM is sufficient enough to play HD videos. Even live video streaming is phenomenal. Android Games like Angry Birds, Temple Run and heavy apps like Draw Something also run flawlessly on the device without the element of lag. Quite good sensitive to response, the screen supports multi-touch also. Although it doesn’t offer smoothness like iPad, yet priced at Rs 6,499 the speed-performance duo is good enough.

The tablet is “Education Oriented” as it is pre-loaded with Study material and Educational contents. Different video courses and test materials have been provided for free to students belonging to different boards. Paid educational contents are also provided as per requirement of the user.

With 2800mAh battery, the device’s backup will last for about 4-5 hours while browsing. While multi-tasking the device is expected to run for 3 hours thus reducing the stand by time. This area needs to be looked after keeping in mind our country’s regular power cuts.

The tablet comes with a front VGA camera that is good for video chatting. It doesn’t have a rear camera which would be asking a bit too much at this price, at least for now.

Last but not the least:

Micromax Funbook is definitely Micro Price and Max Features tablet. And being a Made in India product Micromax Tab lives upto its expectations. Loaded with almost all features such as Wallet friendly, Portable, Dual App Store, 1.2 GHz processor and most importantly Android 4.0 Icecream sandwitch, Micromax Funbook stands tough and unbeaten as of now in the Tab world.