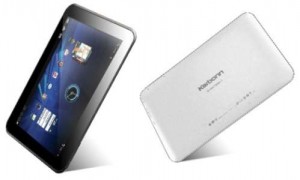 Karbonn seems to have gone on a device launching spree with the launch of three new dual-SIM Smartphones- A11, a7+ and A1+ a few days ago and another two new tablets- Blade and Marvel.

During the launch of the tab, Shashin Devsare, Executive Director, Karbonn Mobiles, said, “Through the new product range and neuvo established eco-system ‘Karbonn Smart’ we wish to usher in a new revolution in the technologically advanced mobile market wherein Karbonn Mobiles can demonstrate its technical stewardship across the world”.

The stiff competition created at this point of the year, with the launch of a number of tablets, Karbonn has to carve out a space for itself. Compared to the Smart Tab 3, the Smart Tab 9 features a bigger screen (1024 x 600) and a more powerful camera. Most other features like the Operating System, camera, storage and networking is the same. So, if you are a price conscious buyer, we suggest you have a look at Smart Tab 3 (Blade). However, for those who like to have a better visual experience for a longer time, Marvel is for you.

Look out for news and developments in this segment in the coming weeks.