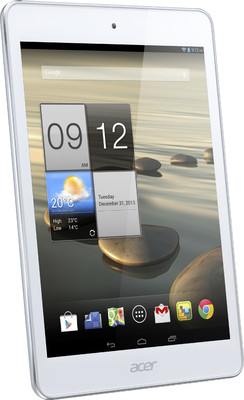 The acer has introduced a tab named Acer Iconia A1 -830, which look like a high-end purchase but it  fulfills basic needs at a reasonable price. It has 7.9 inch screen which can be easily carried in your pocket. Its improvement over its last launch i.e. Acer iconia A1-810. Its performance has been improved from the earlier one.

If you are in need of both function & fashion , then this one is the optimal solution for you. It has a modern slim profile, smooth finish around corner and edges provide a comfortable melt in hand experience, though there is not any grip support to design.

With a 7.9-inch display and 4:3 aspect ratio, it opts for the typical on-screen Android navigation bar, and it features an Acer logo in the center of the bottom bezel, with the front-facing camera in the middle of the top bezel. When in landscape orientation, the side bezels easily accommodate thumbs, and when in portrait mode, holding it in one hand isn’t a stretch — even in small hands.

The top edge of the tablet houses a microphone pinhole, a Micro-USB port, and a headphone jack. On the right edge, the prominently protruding power and volume buttons sit on top, while the microSD card slot — expandable up to 32GB. The back of the tablet is appropriately simple, with dual-speakers on the bottom half and the rear-facing camera on the top right corner. The Iconia A1-810, the model before the A1-830, offered a Micro-HDMI port, but it appears Acer sacrificed it on the new model to meet its low-price.

Though there is tough competition in Indian market, it had been launched at reasonable price as compared to the Samsung Galaxy Tab 3 8.0 which cost Rs.22,800, both are having near about similar feature.