Ambrane A-7 Ultra Slim: Ambrane, a near household name now, has come up with one of the cheapest Tablet PCs in the market. But by pricing it at a cheaper value, they don’t mean compromising with the quality. The tablet is no lesser in specs and corresponding features than any of the lower budget segment players. The plus for this Tab is a decent display with 800×480 pixels.

It is a good Tab if you want a typical gizmo feeling but by not spending a big amount out of your pocket. Have a look at the other vital notes presented to you in a tabular format below.

Find this tablet being sold like hot cakes on Flipkart.com

Also check the SIM CALLING model from the makers off the A-7 Ultra Slim, the Ambrane AC-770 Tablet PC.

HCL ME Tablet U1, a tablet which will suit you if you seek reasonable quality assurance at a reasonably lesser troubled price tag. This Tab has the quality check from one of the most reliable Indian company, HCL. With this Tab HCL shows its intent to not pass up the growing opportunity, from the proliferating budget tablet demand.

Let’s draw your attention towards what this Tab has to offer at its price. The Tab is a 7 inch LED screen with Android ICS to flaunt as its OS. With just 4 GB as internal memory, the tab gives a sigh of relief with its expandability up to 32 GB as external memory. HCL ME U1 features 1 GHz Processor and 512 MB RAM on its chipset.

Other useful features which you should understand before you go for this Tab:-

Reach out and grab the best deal from Junglee.com for HCL ME tablets. 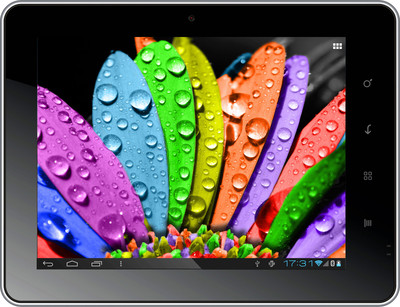 SIMTRONICS X-PAD X720, a fresh piece in the tablet below Rs 5000 category. This tablet offers nothing extraordinary or more than the others in this flooded budget category, but certainly is one of the cool options.

It is a 7 inch Android Tab with Cortex A8 1 Ghz processor and 512 MB RAM. The look of the tablet has some certain edge over its greater rivals in the business. The attractive price of the tablet is in compliance with the mushrooming Tablet market’s lower budget segment. This shall help the makers have good sales of their potential product.

Read below the noticeable specs and features of SIMTRONICS X-Pad X720:-

Interested in buying? Buy this Tab from Flipkart which offers the cheapest of all. Enjoy!

This Diwali, My Tablet Guru.com hopes to bring to its readers a new reason for joy and celebration. For all those of you searching the internet for online purchase of your favorite Tablets, My Tablet Guru.com has launched its own Tablet retail. The facility will be for the moment available in Pune only. END_OF_DOCUMENT_TOKEN_TO_BE_REPLACED

The government is finally taking proactive steps in its commitment to modernize education in India. On Education Day, November 11, it plans to introduce the first batch of the new Aakash II tablets to around 20,000 students.  END_OF_DOCUMENT_TOKEN_TO_BE_REPLACED

On the 16th of October, Byond Tech, the Pune based mobile manufacturer company, launched itself into the Indian tablet scene with its low cost Mi series. Its first product the 7 inch Mi1 offers everything a user today wants in terms of design and features. However, it is the 3D feature that is set to attract a lot of people. Lets take a look at what it has to offer.

The Mi1 comes pre-loaded with applications in regional language apps and MS office suite which is set to attract a lot of local buyers.

Also featured in the device is a Kinetic scrolling touch pad and a capacitive 5 point multi-touch screen.

The 3000 mAH battery will provide a backup of 4 hours surfing time and 6 hours of video streaming which is a good thing as the device is priced at Rs 4,300.

The Mi book Mi1 will be available in shades of both Black and White and will come with a portable keypad.

But all said and done, it is the 3D image and video feature which will be of interest and will add to the fun. 3D goggles will come with the package. Here’s a brief look at the specifications.

The launch which featured Bollywood diva Zarine Khan walking down the ramp, also saw Byond Tech announce its plans to launch 9-inch and 10-inch tablet variants with built in SIM card slots. These devices forming the Laplet series from Byond Tech will all be priced below Rs 11,000 and will feature 3D pictures and goggles.

Mr. Manish Jain, Director of Sales at Byond Tech believes the company to sell around 1 million such tablets within a year and hopes to caputre around 15 percent of the emerging tablet market in India. Whether or not he will be right is an answer that only time can tell.