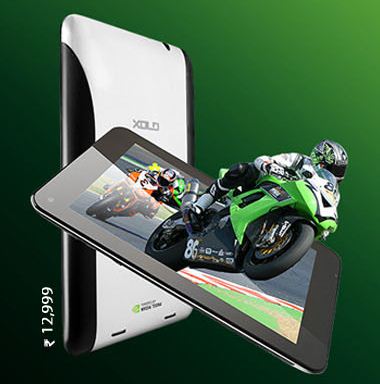 Xolo is a not a new name to Indian tablet market. It has been a top cat in both the arenas of tablets as well as smartphones.   Adding a pinch of newness to its tablet segment, Xolo unveil the new Xolo Play Tab 7.0.  With the motto to provide something innovative and off beat every time, Xolo has heated up the market with this new slate that has been claimed to be the world’s only 4+1 TM quad-core mobile processor. The NVIDIA® TEGRA® 3 processor which is twice as fast as other processors make extreme multitasking, ultra smooth web browsing and console quality gaming a dream come true. Play Tab 7.0 is similar to XOLO Play T1000 Smartphone launched in July, 2013 but makes the experience richer with its 7 inch LCD Capacitive IPS Touchscreen display with 1280 x 800 pixels.

So, this silver slate in your hand is an extreme of visual delight, gaming playability and “ the next level” performance experience. Go and grab it…

We keep talking of Tablets being used for business purposes extensively. So here is one Tablet Pc, specifically designed for the Industrial and business executives and yes, gamers too. END_OF_DOCUMENT_TOKEN_TO_BE_REPLACED

Ever since Tablet PCs have started using quad core processors, it’s become a sorta competition amongst all the Tablet PC manufacturers, including Newsmy, to come front and actually secure a position in the quad core Tab segment. And today, Newsmy does it yet again. After the launch of various previous quad core models, the makers launch Newsmy S8 mini. More than it being in the news for its processor, the Tab is being talked about its ultra thin built which is as sleek as 7.2mm.

2) Because of the dynamic linear design of the Tablet, the tablet is just 7.2mm thick. Having said that, the thinnest part of this Tablet PC is even 4.4mm.

4)  The S8 mini is loaded with high performance quad core GPU, which is Mali 400MP and 2GB RAM. Combining the power of both, 3D gaming is a delightful experience on this very Tablet PC.

5) 28nm manufacturing technique: This technique is a top class technique which enables a Tab for comparably less power consumption and also enhances the performance by more than 50% of what is there in the normal scenarios.

6) The Newsmy has a new feature which is not very common yet. It even supports 4G network, but via external Internet dongles only. As per the company claims, the download can see numbers up to 100Mbps and uploads up to 20Mbps.

7) All sorts of known sensors in a Tablet PC are installed in the Newsmy S8 mini. For example: GPS, Accelerometer, Barometer, Fingerprint ID etc.

8) This Tab comes with Dual Camera. The front camera is 2MP and the other is 5MP.

9)  Internal storage is 2GB with the mechanism to extend it to 32GB, using an external memory card.

All in all, it is a good gaming Tablet PC.

There is no official confirmation on the pricing, what this tablet will be seeing. We will update this space with the same, very soon!

Surf and check about various other Tablet PCs awaiting a release. Click here to read more.

Razor Edge tablet is a Windows 8 based tab and is first of its kind in the market targeting crazy gamers. Play games like Call Of Duty, Fifa, GTA, Counter-strike all on the move. This awe-inspiring tablet is a sheer class apart stuff and has the edge over all others in the race and hence the name, “EDGE”. Edge Tab is indeed a complete desktop replacement gaming device. We see only Microsoft Windows Tab and HP Envy x2 tablet to give any sort of competition to the Edge, if at all there is any.

The design of the Edge tablet  itself explains the device’s purpose quiet loudly. The attached console gives a very connected feel while playing a game on the tablet. If you want to go for games which demand keyboard/mouse or want to use external consoles for multiplayer or you just want your HDTV to be the screen for you, not an issue here with EDGE. You can perform all these here and many more. The regular version of the tablet runs on Windows 8 with i5 processor and 4 GB DDR3. More Battery life (presumably double) can be brought through optional 40Wh battery addition. Heat dissipation is an issue which thankfully, has been taken care of quite efficiently by the makers.

Costing $999 for a tablet, well looking at specs,  seems to be  fair enough deal, but you can’t use the device in its full swing until you are also buying its expensive accessories say its keyboard and other consoles. This will surmount another $300-$400 on the bill. Sigh! It makes it a one fat piece in the market targeting anything but the masses.If you are getting restless to try your hands on this invention then sorry mate! you got ton wait for a few more days. Further more it will be launched first in the US market and later on into any other country. Find the link below useful where you can book this tablet (only US addresses will be entertained). Book it from here.