Asus has partner with Intel for its upcoming ZenPad Tablet. It is expected to get announced at Computex 2015 which is just a week away. Though, Tablets has been losing its ground to big phablets but Asus has keep researching to bring out innovation in tablet technology.

Tablet will feature display with Aspect Ratio of 4:3 which are common in Apple devices and recently launched tablet of Samsung Galaxy A series has the same ratio. It has been embedded with front-facing speaker to provide superior sound clarity while watching video.

To provide grip, edge of the tablet has leather strip and Intel inside logo which confirms that tablet will be powered by Intel processor.

ZenPad series will come in two models, featuring 7-inch & 8-inch screen size. Larger model will have higher resolution of 2048 * 1536 pixel and standard 7-inch slate will be launched with 1024 * 600 pixel resolution.

ZenPad 8 will be running Android Lollipop v5.0 out-of-the-box and will be powered by Intel Atom quad-core processor. Tablet will come with option to RAM i.e. 2 GB & 4 GB and for the internal there is not much news but expected to start with 16Gb internal memory which can be expanded via. microSD card.

Tablet has got Camera at both end without any word on its capacity. Most tablets launched by Asus has Sim slots with voice calling feature. Tablet will get competitive advantage if Sim slot with calling feature has been provided. Asus Fonepad 7 was a huge success in budget tablet range and with the new ZenPad, expectations will be flying high.

Asus has launched two new tablets in India dubbed Fonepad 7 (FE171CG) and Memo Pad 8 (ME581CL). Both the tablets has been exclusively launched with Flipkart.

Specification feature Dual sim voice calling tablet that runs on Android Kitkat v4.4 with Zen user interface. It feature 7-inch WSVGA IPD Display with pixel resolution of 1024 * 600. It display has been embedded with anti-fingerprint coating with 178 degree wide viewing angle. It has been powered by 1.2-GHz Intel Atom Z2520 processor coupled with 2 GB of RAM. It packs 16 GB of internal storage which can be expanded via. microSD card upto 64 GB.

Connectivity includes 3G, Wi-Fi, Bluetooth and GPS. It features sporting camera of 8 MP as secondary camera while 2 MP on front. Battery is of 3950 mAh and measure 110.6 * 196 * 7.9 mm in dimension. It will hit the store with two color variant i.e. White and Black.

Memopad 8 was launched in partnership with KIDDI and was announced as “World Lightest 8-inch LTE tablet” by Asus.

Specification speaks, 8-inch Full HD IPS display with pixel resolution of 1920 * 1200. For the safety of display, Corning Gorilla Glass 3 protection has been used. It runs on Android Kitkat v4.4 with Latest Zen UI on top. It has been powered by 64-bit Intel Atom Z3580 quad core processor clocked at 2.3 GHz coupled with 2 GB of RAM. It packs 16 GB of internal storage with external microSD card support of 32 GB.

Connectivity includes, 4G LTE, Wi-Fi, Bluetooth, GPS and NFC. It features 5 MP camera at back while 1.2 MP camera at front. It has been backed by 4350 mAh battery which is rated to deliver 9 hour of battery life.

Both the tablets has been designed for serving computing needs. Tablet are easy to carry and weights 300 grams. Zen UI interface has been pre-loaded in both the tablets to provide users with lighting connectivity and speedy response.

Asus has expanded its Fonepad series termed Fonepad 7 (FE375CL), running Android Lollipop v5.0. It has been listed on company official website and will hit the shelves from Taiwan. It will cost $ 250. It world wide release and availability has not been disclosed till now.

Specification:-
Specification feature 7-inch WXGA IPS LED-backlit display with 10-point multi-touch support. It resemble pixel resolution of 1280 * 800. It has been powered with Intel Atom Z3530 Quad-core processor clocked at 1.3 GHz and has been coupled with 2 GB of RAM. It is available in two variants when compared to inbuilt storage i.e. 8 GB and 16 GB and can be expanded upto 64 GB via. microSD card. It has life time Web-storage of 5 GB which comes with additional 11 GB space for first year. It can be used for voice calling with single Sim support.

Connectivity:-
Connectivity includes Wi-Fi, 4G LTE, Bluetooth, GPS and micro USB. It has been embedded with sporting camera of 5 MP as primary camera with 2 MP on front. Battery is of 15 WH, which delivers 12 hours of battery life.

Asus has been renowned for their Asus Fonepad 7 (FE170CG) Tablet, which has been accepted globally and has been successful in setting benchmark for voice calling tablets.

Asus Transformer T300 Chi:-
All of the three Hybrid tablets comes with aluminum body with laser-cut chambered edges.
Transformer T300 Chi features 12.5-inch IPS WQHD or Full HD display and has been substitute for Surface Pro. It comes in two variants when compared to pixel resolution i.e. 2560 * 1440 (WQHD) cost $ 799 and 1920 * 1080 (Full HD) cost $ 699. It will be powered by Intel Core M processor which is designed for fan-less technology.
It comes with 4 GB or 8 GB RAM and Solid State Drive of 128 GB. Tablet along with dock keyboard measures 1.65-inches, which is thinner in comparison to Macbook Air. 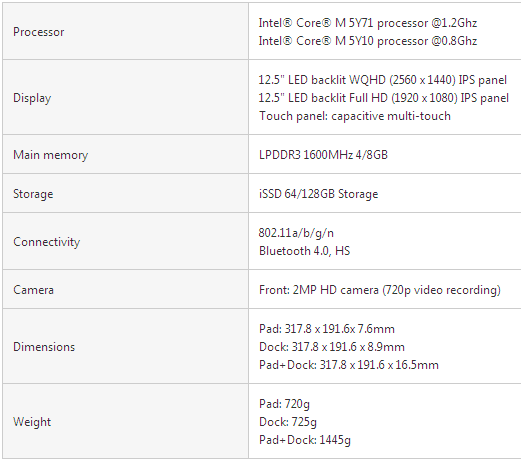 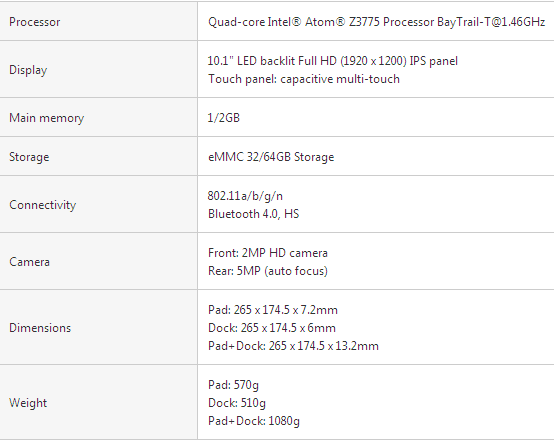 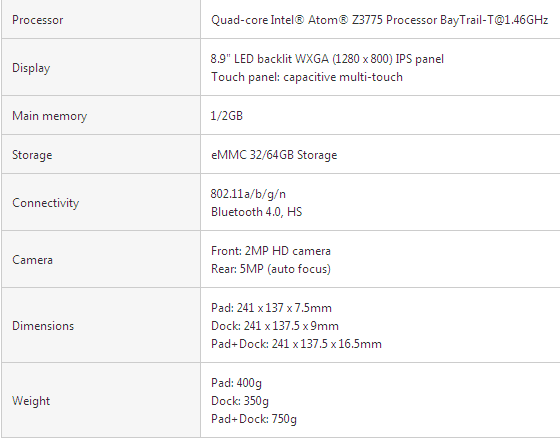 All of the above Hybrid Tablets feature sporting camera of 5 MP on the back with 2 MP in front. Connectivity includes Bluetooth, Wi-Fi microUSB.

Taiwan Tablet Giant- Asus has launched its voice calling tablet in India. It has been dubbed as Fonepad 8 (FE380CG) and can be exclusively launched with India’s leading e-commerce website i.e. Flipkart, with a price tag of Rs. 13,999.

Specifications:-
Specification features, 8-inch WXGA IPS display with a pixel resolution of 1280 * 800. It will out-of-the-box with Android Kitkat v4.4.2 as its running platform with Asus Zen user interface on top. It is Voice calling tablet with Dual Sim support and 3G connectivity. It is powered by 64-bit Intel Atom Z3530 quad core processor clocked at 1.33 GHz. It has been coupled with 2 GB of RAM and packs 16 GB of inbuilt storage. The storage can be expanded via microSD card upto 64 GB of space.

Connectivity:-
Connectivity connects Wi-Fi, Bluetooth, GPS, micro USB, 3G and 3.5 mm audio jack. It has sporting camera of 5 MP on rear and 2 MP on front for video calling. It has been loaded with marathon battery of 4000 mAh which claims to offer 12 hours of Video playback or web-browsing and upto 21 hours of Voice calling.

Asus tablets are worth buying. They are loaded with latest technology and comes in very competitive price. Asus Fonepad 7 has a remarkable review, across all over the world and Fonepad 8 is refreshed version of its most successful tablets.